Distinguishing Donald from other Ducks 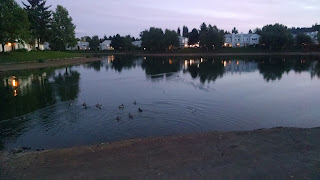 This evening, I engaged in my new-found habit of walking over to the exercise equipment on the other side of the lake. On the way there, I walked past a group of ducks, all settling in for the night (it was just after sunset). This got me thinking about Donald Duck, who is, for reasons I innately understand but cannot adequately explain, much more popular in Scandinavia than in America. I suppose it has something to do with ducks being natural.1

Conversely, Scandinavians probably can't make any sense of why Americans would even remotely like Donald Trump. So, well, I think that may have something to do with the American definition of leadership. I was listening to a radio show this morning, called literally the boss show, and they were talking about the qualities that make a good leader. I was in a Leadership Training program all last year, and had to read articles and books like the one they were discussing, so the program caught my interest. What makes a good leader? The thing that struck me the most during my training was how important it was that a leader have a moral core, that a leader had to be very clear where their values really were placed. And of course they had to have the mental and physical stamina to be willing to express those values, to take risks, to be brave, to say what needed to be said. I used to have that quality when I was a kid, in fact other people recognized it in me and would ask me to do things no one else was brave enough to do. And then somehow it sort of faded, I was told I was too intense or too opinionated, and I got in the habit of having my own opinion about things but not saying what they were, or questioning my own opinion. So the leadership training seminar was really helpful because it taught me that what my work expects of me is to stand up for what I know to be right.

The program was also interesting for what it suggested about why the wrong person might sometimes rise to a leadership role. I will let Michael J. Fox and Michael Douglas elucidate that one.

It is strange, though, how many good people there are in the world who do not recognize that they have leadership skills, when everyone around them feels that they do. They ask them to run for office, they listen to them when they speak, because what they say comes out of a place not of selfishness but of helpfulness. Unfortunately, it often isn't enough that other people want you to be a leader, you have to want that responsibility for yourself, also. It sure is fabulous, though, when someone really does decide to step up to the plate, to stick with the American theme.

That's what we admire, that's what distinguishes one duck from another.

1. Daffy Duck certainly held more of my attention when I was a child, even though I couldn't quite understand his weird need for attention. Anything on the Warner Brothers channel seemed cool to me, I guess.

Lissy said…
Then there is the duck in this song, which is supposed to be frustrating or annoying or funny or contrarian, but I have decided is just boring. https://www.youtube.com/watch?v=MtN1YnoL46Q