Showing posts from November, 2016
Show all

November 30, 2016
Today there was another "terrorist attack" at a university in the United States. A young man from Somalia drove his car into a crowd of people, then jumped out and stabbed several others with a knife before the police shot him. Using one's car as a weapon appears to be a new terrorist tactic, at least it is similar to what was done in Paris over Bastille Day. And he's Muslim; he'd been quoted in the school paper saying how hard it was for Muslims to find a place to pray at the university a few months earlier. A friend of mine works at The Ohio State University, where this attack took place. She and I went to Berkeley together, we both studied Old Norse. She wrote her dissertation on the figure of Odinn as a "guest" in several different genres of Old Norse literature. She's more of a folklorist, interested in the subconscious and symbolic, whereas I am more interested in human-material interactions. I felt really bad for her today, what a terrible t
3 comments
Read more 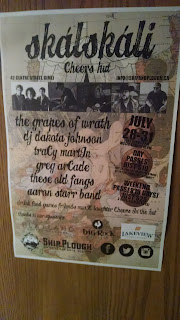 This summer I took my son to Icelandic Camp in Gimli Manitoba. It was my first time in "New Iceland". I had an amazing time and met some very nice people - even went sailing out on Lake Winnipeg with two sisters raised in the area that spoke Icelandic as their first language. It was really fun hearing their dialect, slightly different than modern Icelandic. That, plus the Icelandic flags, vineterta in the bakeries, and murals depicting the Icelandic settlers arriving all made me feel like I was somehow in Iceland. There was even a pub in town called the Ship and Plow I went to one night, with a huge Icelandic flag signed by all the people who had been at the pub to watch the Icelandic national team defeat England in the Euro Cup. It was like I'd found an Iceland I could drive to! But then I started to notice a few things. Like the fact that the camp was at the Ukrainian park, and that the chef was Ukrainian, not Icelandic. And at the pub, I didn't meet any Icelander
2 comments
Read more

November 25, 2016
So, I haven't blogged in a while, or been keeping up with the Icelandic news much. But I must say I am a bit pleased that US politics aren't the only ones in a bizarre post-election limbo land. The Icelandic situation of not being able to form a coalition government is intriguing. How long until a government is formed, and will the resulting cabinet be as mish-mash-apple-sauce as whatever blob is emerging from Trump Tower? I don't know, but I am morbidly curious to witness this slow train wreck. I was looking back through some old blogs, and discovered it was in August of 2015 that I posted about why Donald Trump might just become the next President of the United States. How very weird that looks to be what is actually happening. It still does not feel real. And there are still several scenarios that might stop it from ever really happening, such as a recount effort in several key swing states, the threat of some rogue Electoral College delegates switching sides, and of
Post a Comment
Read more
More posts