August 25, 2015
When I was an undergraduate student, way back in the early 1990s, the woman teaching me Norwegian was named Olwen Shaw, a decent teacher and the first person I ever knew named Olwen. But what always made her stand out in my memory is that she drove a really old Saab, like a 1970s vintage Saab. And the reason, she explained, was she was getting her PhD in Scandinavian, and so she wanted a Scandinavian car. I'm not sure if I had ever, before then, really thought about cars in that personal sense of identity, they had always rather been markers of status and wealth. Anyhow, when it came time for me, after my first divorce, to buy my own car, I knew it had to be a Saab. I wanted something that would really solidify my identity as a Scandinavianist, and moreover Saabs are weird cars that plenty of people dislike, which made me glad, since hey, I was being a rebel anyhow. So I bought my 1993 Saab 9000 CS in October of 2001.

I hung on to that car even when I lived in Iceland, letting people borrow it when I was away, putting it in storage in my parents garage for a few years, spending thousands of dollars fixing it up when I finally moved back to California in 2011. I remember picking it up from the car dealer after that questionable and probably extravagent use of my limited funds, and commenting on how getting into the Saab felt like putting on my favorite pair of jeans again. Quite a difference from the practical but clumsy Mazda 5 I had driven while living in Iceland. The best thing about the Saab, besides the fact that it fit my identity as a Scandinavianist, is that it handled turns really well, that car was designed for weaving around winding roads, one could tell. But in other ways, I had started to regret my decision - the windows in the back didn't roll down, the headliner was sagging, the sun roof stopped working ages ago. So I was relieved when I was given a second car, a tan Ford Windstar. I had it on loan from my parents, so in that sense it wasn't my car, but it certainly fit my mom image a lot better than the Saab did. When I went to pick Palmer up from school, I always used the van.

And then I got this job as director of the Scandinavian Cultural Center, and so I insisted on having both the Saab and the van up here in Washington with me, even though both of them were old and had various mechanical problems. And let me tell you, no one needs two cars. It doesn't help at all, it is just twice the headache. But I managed to limp along with both of them to the bitter end. The van's engine cracked after overheating driving back from California in January, while the Saab had its clutch fall out on me a few blocks from my house in May. Both cars were done for completely.

So I bought a new car a few months ago. And I decided to get a car I really liked, instead of one that fit some sort of image or fulfilled an identity function for me. I remembered long ago, back in highschool, that a friend of mine owned an Audi, and the first time I saw it, and the first time I drove it, I thought it was a perfect car. I guess I'd always resisted getting an Audi, maybe because it seemed disloyal to get a car that was neither American nor Scandinavian, even though I liked the way they looked and the way they drove. But in May, I decided just to go for something I liked for its intrinsic qualities, rather than what it said about me. Audis seem to me like the way a car should be, not too fancy but not too dull, not too expensive and pretentious but not run of the mill either. So I saw one listed in the paper near my house, and I test drove it. Boy was it fun to drive, it really accelerated up the hills around my house, much better than the Saab had done, and I was pretty well hooked, the Audi is a zippy little car, suits my driving style very well.

But I didn't buy the Audi right away, instead I thought about it for a few weeks, worried it would get sold to someone else, not wanting to test drive any other car, but still wondering if it really was time to get rid of my Saab. And then one Friday, coming home from work, I couldn't get the Saab to change gears anymore. So I asked my sister to drive me to the car dealership where my Audi was waiting, and took it home that night. If my Saab had not completely died out on me, I am not sure I would have taken the plunge to buy the Audi. I am rather loyal like that, I am loyal to a lot of old things I have, like I am still using the same computer I got in 2007, and I keep shoes that are falling apart, preferring to go to the cobbler to fix them rather than going shopping for something new. I don't like to move on just to move on, I always like to feel I have made sure to totally run my course with a thing before I get rid of it. But there is no doubt in my mind that it was time to get rid of the Saab, not only was it falling apart, but the company that made it had gone out of business. It was well past time to move on.

And I've moved on to an Audi, a beautiful black Audi with a perfect interior and an awesome radio and air conditioning system. My Saab had two small Icelandic stickers on it, but now my Audi has one big one ÍS sticker on it. I've already had people waving at me on the freeway, obviously fellow Icelandic-Americans who don't see anything un-Icelandic about me driving an Audi. 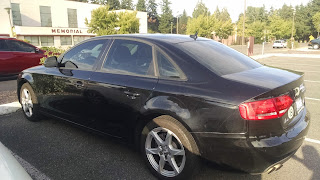 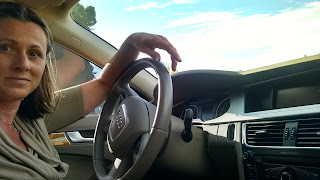 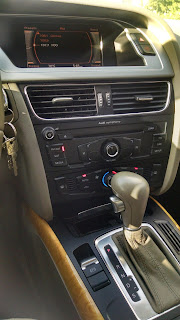 I've only had it for a short while, and I haven't even read the owners manual yet. Every once in a while, I wonder if the tranny is starting to slip, or if there might be something else wrong with it, but knowing me, even if there were, I wouldn't get rid of it anytime soon. It's my car now, my only car.