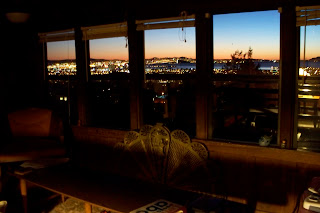 I live in the attic of an old house. All around me there are reminders of the former uses of this space, the shape of the ceilings and the entrance through the middle of the floor can only be accounted for by reference to the fact that this was originally an attic. It is still an attic.

But there have been people living it it for quite a while, and each one I think has done something very different with the space. Unlike most apartments or homes, where there is a clear kitchen, a clear master bedroom, etc., this attic has nooks and spaces that can be used in different ways.

Probably the most amazing feature of the apartment is the five small windows all lined up along one nook, with a view that stretches from the Marin Headlands across the Golden Gate Bridge, over all of San Francisco and across Oakland. This is a vista par excellence.

The other people who have lived here have done various things in this nook, as in other spaces in the attic. The photos on line for this apartment show a bed here, in this nook overlooking the city, which is very odd since there is actually a bedroom on the otherside of the bathroom. This former inhabitant simply refused to use the bedroom as such, as best I can figure.

The guy who lived her before me, and his mother who held the lease and actually used to live here too, used this space as an office. They had their desk in this nook with the great view. I think that is a strange choice, since if one is seated high up at a desk, one misses out on most of the view out of these low windows. And it suggests to me they never had company, no company at all up here in this wonderful attic.

I have put my desk over by another window, one with a view out over the street. Those windows are higher, and it is a pleasant distraction, to sometimes watch the cars drive down the windy street outside my window. I have put my bed in the bedroom, because that is where it belongs. And I have made a seating area out of this wonderful nook, with the five low windows. I have a long low coffee table, and several low chairs around it. This is a space that should be shared.

They say women like to decorate the home, and I guess I am no exception. The reason for this is because women think they know where things should go, and I have no doubt that my way of arranging this attic is in fact a much better way of doing it, than has been done before.

Lissy said…
Thank you Halla! I guess it is good sometimes to not have a flatmate to have to argue with about where to put everything. And some women can really go overboard with it; I know some men who aren't even allowed by their wives to arrange books on the bookshelves!
February 1, 2011 at 6:12 PM