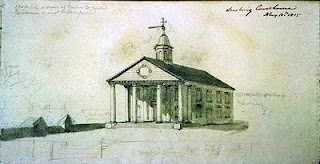 This weekend when Nichole was visiting me, we were talking about counties in the U.S., in particular how many teeny-tiny counties there are in all the midwestern states. Iowa has 99 counties, Ohio has 88.

The nice thing about having so many counties is that each county has a courthouse. I like the word courthouse, I guess because house is being used the way hús in Icelandic is sometimes used, not for a private home where people live, but for a public building.

Courthouses are also a very interesting way to catalogue American architecture; though many of them are historic buildings, there are also examples of very modern courthouses. The architecture also indicates something about the wealth and importance of a given county.

But I also like courthouses I think because every wedding in the United States starts at a courthouse. I am not sure if it is the same here in Iceland, if one needs a license from the sýslumaðurinn before getting married, but in the U.S., a trip to the courthouse is actually the legally binding moment of a marriage. Which is why of course courthouses also show up in a lot of American movies.

Pierre said…
Once upon a time, there was a sýslumaðurinn walking in the street. He met another sýslumaðurinn and, after having sais "Hello", they told themselves histories of sýslumaðurinns.