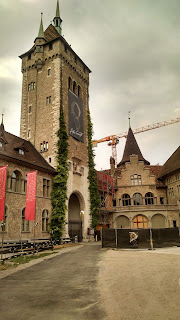 I wrote an article a few years back called "Hverdagslegur: The Rhetorical Challenge of the Everyday Object", which was a review of the (then) newly renovated and expanded National Museum of Iceland. So obviously I am interested in National Museums, especially one's being renovated. And one happens to be right next to my hotel here in Zurich. So yesterday, when it was raining and the conference was over, I headed over to that museum.

I'd taken pictures of the outside of it a few days earlier, because it cracked me up that the outside of the building was an unorganized construction zone, full of fences and gravel, yet there were big signs declaring optimistically "We are Open!" with arrows pointing the way through the mess.

The other thing that cracked me up was that the symbol of their currently featured exhibition is a gigantic cowbell. Having seen the exhibition yesterday, I now understand that the artists featured in the exhibition was largely responsible for huge cowbells becoming symbolic of Swiss culture, which by extension means that's why we were ushered into the sessions of the Saga Conference all week with the ringing of a huge cowbell by the organizers.

Anyhow, yesterday I went into the actual museum itself, and I can now confidently say that the exterior is a perfectly appropriate advertisement for the hot-mess one will find inside the museum. The museum is an artifice, a deliberate rhetorical effort to pretend there is such a thing as a Swiss nation, by neatly housing literal rooms from all over Switzerland into one fantastic, castle-like building purpose built as the national museum in 1898.  The current curators have the unenviable task of now trying to literally deconstruct that effort, which they have done by adding all sorts of modern flourishes and ironic, self-reflective exhibitions, managing the flow of traffic such that one finds oneself typically going through historical exhibitions backwards in time, etc.

I posted some photos on facebook, but I don't think it sufficiently captured my strong reaction to this place. Let's just say I really missed having a snarky companion with me as I wound my way into this particular heterotopia and tried to wrap my head around it.