August 12, 2011
Today was my last day of teaching summer session here at Berkeley. The course this term was focused on readings that are set in the North Atlantic. I am going to do the same theme for the course I am scheduled to teach in the Fall. 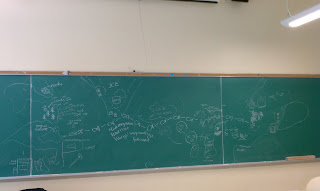 For the last day of class, I drew a VERY bad map of the North Atlantic on the black board (actually green, as you can see from the attached photo).  Then I had the students go in groups up to the board, and illustrate the map according to how each of our reading depicted the various regions. Unfortunately, the outlines of the coast that I drew were hard for the students to decipher; even though I told them what was what, one group initially put everything in Spain they meant to put in Norway.


Poor Iceland did not get much attention from the majority of our readings, and in fact only the students focusing on the book "Cod: A biography of a fish that changed the world" even bothered to include Iceland in their illustrations. They labeled it "Old School" since they somehow got the impression that Icelandic fishing fleets are not trawlers, and are still fishing in the traditional way. 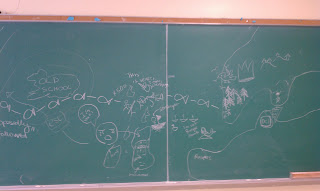 I don't imagine it will make too much sense as just a photo, but then there is always the comment kerfi if anyone is really curious what in the world my students were thinking. Or how it is that I can make such a terrible map.